Where the Action is 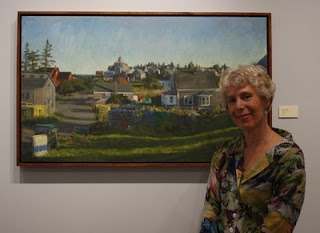 Last week I went to the Dowling Walsh Gallery in Rockland, Maine, to the opening of the Monhegan show. Looking around at the crowd, it was hard to believe this country is in the middle of a recession!

First of all, I must reiterate that this gallery space is worth seeing--and it keeps getting better. There are three rooms (each as big as an average storefront) downstairs, and now there is an equal amount of space above it, on the second floor. This means the gallery can hold several exhibitions simultaneously. The crowd poured in the door and went every which way depending on which shows they were interested in. The artists range from N.C. Wyeth, George Bellows, and Andrew Winter to Peter Poskas, Jon Redmond, Connie Hayes, Colin Page--famous artists to emerging artists. Wine, cheese and delicious finger food was served. I had a great time chatting with other artists, art lovers, and collectors. Maine artist Mary Cupp traveled two hours to the event--it was nice to see her there.

Here I am beside one of my paintings in the show. This one is of Monhegan village and the Island Inn, from the lawn of the Monhegan House. The photo was taken by artist and friend Diana Cobb Ansley.
Posted by Alexandra Tyng at 7:14 AM Links to this post 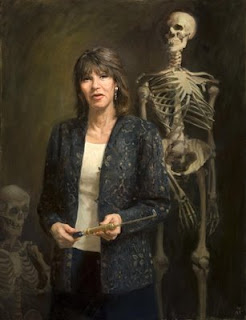 There have been so many landscape-related happenings lately, I totally forgot to mention a significant portrait event in early 2009. These days there are too many blogs, Facebook posts, and newsletters for an absent-minded, un-tech-savvy person like me to keep up with! I know, I shouldn't be making excuses, but it's all too true.

On January 9th, 2009, the Philadelphia College of Physicians (which houses the famous Mutter Museum of medical artifacts) hosted a party to celebrate their 150th anniversary. I had been asked to paint the portrait of the museum's former director, Gretchen Worden. It is a posthumous portrait of a dynamic, humorous, and compassionate woman who devoted her career to the museum. You may have seen her on the David Letterman Show; she appeared on the show three times over the course of several years.

The Mutter Museum is a medical museum founded by Thomas Dent Mutter in the 19th century with the donation of his collection. The collection, studied by medical students of the day, includes human skulls and skeletons; preserved body parts showing evidence of various diseases, conditions and abnormalities; and old medical instruments. A plaster cast of Chang and Eng, the original Siamese twins, resides there. The purpose of the museum is to preserve knowledge of, and to educate the public about, human pathology and medical history. Personally I have always found the museum to be a fascinating place, and I was thrilled to be asked to paint its director.

In the background of the portrait is the skeleton of a 7' 6" giant and the skeleton of a 3' 6" achondroplastic dwarf. Ms. Worden is holding a lithotrite, an antique instrument used to crush bladder stones!
Posted by Alexandra Tyng at 9:41 AM Links to this post

This is the title of the Fischbach Gallery's summer group show. What is good about the news? you might ask. Well, your glass can be half-empty or it can be half-full. Some aspects of the economy seem to be showing a glimmer of hope--art, for instance. It could be that people just get tired of doing without all the luxuries that make life more than just subsistence. . . or it could be that people are actually feeling that the stock market is on its way up and they can start spending again. Whatever the reason, collectors are venturing out again.

Some of my work will be in the show, namely Maine landscapes. My work ranges from sweeping aerial vistas of the Maine coast to smaller, more intimate views of places, and some in-between.

www.fischbachgallery.com
Posted by Alexandra Tyng at 9:19 AM Links to this post