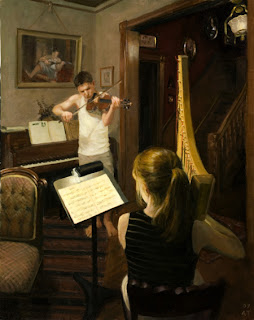 My painting "The Duet" is my first figurative work ever to be accepted into a juried show, and I'm very excited about it. Here are the details of the show: 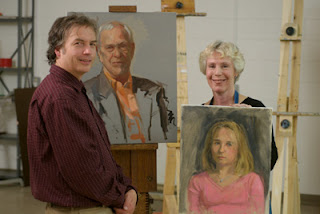 In conjunction with the portrait show, Garth Herrick and I did a two-hour demonstration at the Wayne Art Center. The event was well-received; I think we had about 40 onlookers who asked interesting questions and kept things lively. I painted a lovely 12-year-old girl while Garth painted the chairman of the Board. Here we are with the results after the two hours were up.
Posted by Alexandra Tyng at 9:29 AM No comments: 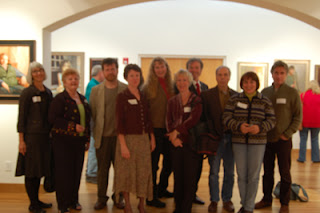 Twelve artists ended up participating in the exhibit, and here is a group shot of most of them (L to R); Catherine Prescott, Addie Cooper, John Ennis, Ellen Cooper, Nancy Bea Miller, me, Garth Herrick, Ernie Norcia, Jennifer Frudakis, and Glenn Harrington. Missing from the photo are Rachel Constantine and Jimm Scannell. The opening reception went very well, and we had a nice review in the Main Line Times.

Portraiture seems to be at the center of a major clash in the art world these days. On one extreme there are those who defend the Modern and Contemporary art movements and categorically despise any art that hints of traditional methods or subjects. On the other extreme are artists whose work is strongly reminiscent of the past and who despise Modern and Contemporary art. Critics like Blake Gopnick of the Washington Post have made some accurate criticisms of traditional portraiture, yet seem unable to distinguish between the more subtle differences between artists, labeling it all as schlocky. Part of the reason portraiture is taking the heat is that, for a long time, it existed as a reactionary enclave of the art world. The main avant-garde art scene did not recognize realism, and especially portraiture and figurative painting, until very recently. You may read this and think, "Alex is not an art historian--she doesn't know what she is talking about," and that is okay with me. I only have an undergraduate degree in art history. But I've been observing and experiencing big changes in the art world recently, and this is my opinion. Personally, I appreciate both contemporary and traditional art. I consider my own work to be somewhere in the middle; maybe "contemporary realism" would be the most accurate description. Why should we dismiss an expressionistic figure by saying the artist obviously painted like that because he/she didn't know how to draw? Why should we dismiss a realistic portrait that shows great skill, expression and soul because it is not painted in a cool style? I will be interested to see what the press says about portraiture in the next few years. Will it be ignored? Villified? Praised? What styles will be considered "true art" or "commercial" and why? This show is only a minor one compared to the Mancini show or the Cecilia Beaux show, but I hope it will raise some questions about these issues.
Posted by Alexandra Tyng at 8:23 AM 2 comments: