The good old summertime – Wish You Were Here at Gross McCleaf

By alison mcmenamin
July 21, 2012   ·   0 Comments
It’s summer at Gross McCleaf, and many of the artists are working in the style of en plein air painting. Landscape dominates Wish You Were Here, a show of twenty-two artists on view until July 27. Following the late nineteenth century tradition, the artists focus on the season’s natural light. While it is unclear if the paintings were actually composed in nature, it is obvious that each of the artists is fascinated by the changing character of light and with the elements of air and water.

Giovanni Casadei, “Ferris Wheel”, oil on board, 9 x 11 inches, Courtesy of Gross McLeaf Gallery
Giovanni Casadei’s “Ferris Wheel,” captures the atmosphere of the seashore. The boardwalk and amusement ride appear in the distance, and the beach is covered with colorful umbrellas. Pink streaks of paint are used in the sky to add warmth to the painting and reflect the sun’s oppressive heat.   Also sharing an interest in the seaside vacation aspects of summer, Alexandra Tyng’s “Afternoon Ferry” depicts the comings and goings in a small, seaside town. In “Early Morning Callers,” breakfast is set at a lake house waiting for rowers to return. Each of Tyng’s works reflect her interest in the figure and the color shifts of natural light.

Naomi Chung, “Ocean”, oil on canvas, 60.25 x 84 inches, Courtesy of Gross McLeaf Gallery
Air and water feature prominently here, and, like all the works in this show realism is the style. Naomi Chung’s “Ocean” shows a water-filled canvas with a barely-discernible horizon. The painting creates the feeling of being lost at sea. With its massive size and meticulous brushwork, Chung captures the wave’s force and destructive potential.
Air and clouds feature in Douglas Martensen’s “Changing Light,” in which rolling clouds dominate the landscape with its low horizon line. With their evanescent quality, the billowy forms have always been a favorite of the plein air painter.

Frank Trefny, “October Bouquet, High Dunes”, oil on panel, 24 x 32 inches, Courtesy of Gross McLeaf Gallery
In a more surreal juxtaposition, Frank Trefny mixes still life with landscape in “October Bouquet, High Dunes,” in which a vase of flowers on a table gets activated by an an ocean scene behind. The added motion gives new life to the flowers and helps create an image of serenity.

Adirondack Painters in the News! 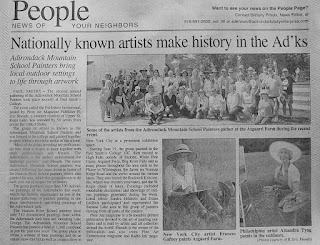 Looks like the "Adirondack Mountain School Painters" got some local news coverage! Click on the image to enlarge it.  And, yes, I'm the one in the huge goofy white hat.
Posted by Alexandra Tyng at 6:20 PM No comments: