This group show, opening September 5th at the Fischbach Gallery, showcases the work of 22 representational artists with a variety of styles and subject matter. I am happy to be included along with many wonderful artists. I'm also pleased that my friend Jeff Gola, who is now represented by Fischbach, will be in the show. Fischbach has been a champion of representational art since the 1960s, through the Modern and Postmodern periods, and into the present day.

Season Preview presents a selection of these Fischbach Gallery Artists’ new paintings that offer a foreshadowing of work to come.  Displaying contemporary American representational painting and works on paper, Season Preview highlights these Artist’s explorations of their artistic sense of style, intellectual approach, and inner passion, everything that evokes new inspirations for their most challenging, current paintings.  Whether a vivid landscape, a lush atmosphere, or an alluring still life, these works of art represent a preliminary showings of each Artist’s ability to push themselves to the brink and become better and better in their skill.

Posted by Alexandra Tyng at 4:29 PM No comments:

I'm excited to announce the opening of my show of figurative paintings--and a few landscapes, too--at Dowling Walsh Gallery in Rockland, ME. Please stop by if you can! 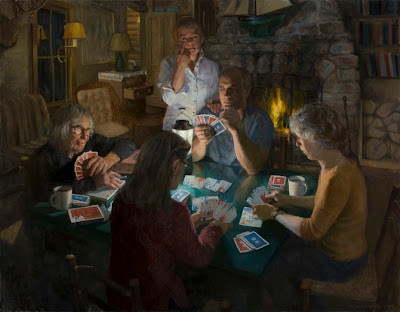 In my latest series of figurative paintings I explore themes of personal/psychological interaction and motivation. Using family members and close friends as models, or characters, I distill ideas down to their essence, creating scenes out of my imagination that appear “real,” although they have never actually happened as they are painted. Time is used fluidly. Situations that developed over many years are painted as though they are happening in a moment of time. People who lived in various time periods appear alongside each other, and a single person can appear more than once, at different ages, within a single painting.

In September, the 14 artists who exhibited last year in The Expedition and Beyond are returning to Principle Gallery in Alexandria, VA for another Women Painting Women exhibition, and each of us have invited another artist to show with us. In addition, four gallery artists will be joining the show. 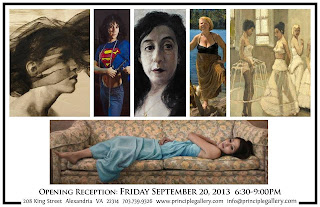 Considering that I'm more of an evolutionary than a revolutionary, and more of a humanist than a feminist, you may ask why I'm excited to be part of a show with revolution and women in its title. Well, I'm excited because I want to encourage change, and because I believe that the work of male and female artists should be seen and taken equally seriously.

The way I see it, WPW is kind of like Affirmative Action. Affirmative Action is considered necessary by some people as a way of eliminating racism--yet it offends other people because by definition it is racist, and how can we get rid of racism by establishing a racist situation? Affirmative Action is an experiment. Maybe it will work, maybe it won't. The ultimate goal is to get to a point where there is no need for it.  I see WPW as similar to Affirmative Action in that it gives women artists venues in which to show work, separated from the work of men, with the ultimate goal being not ghettoization, but inclusion, on equal footing, with male figurative artists. Women Painting Women gives accomplished, professional female painters the chance to show the world what they can do, to increase representation of female artists in galleries and museums. I'm all for a level playing field.

Just to make it clear, I cringe when I see art shows entitled "Five Women Painters," or "Three Women Paint the Figure." To me, the fact that all the painters are women is not enough to make a valid theme for a show. I have a method for testing these titles out: in my head, I change the titles to "Five Man Painters" and "Five Men Paint the Figure" and see if it sounds strange. It does. Mentioning the sex of the artist doesn't add anything to the title, in fact it detracts from it because it distracts from the point that shows like this really should have nothing to do with the sex of the artist.

But Women Painting Women has a valid, worthwhile, and interesting theme. A few years ago, the WPW blog was born from the question asked by Sadie Valeri, Alia El Bermani, and Diane Feissel: (to paraphrase) "Do women paint women differently than men paint women? Let's find out!"

Three or so years later and several shows later, we have 32 female artists exhibiting their paintings of women at Principle Gallery, and that question can be asked, pondered, and maybe even answered by the people who see the show. I believe that the viewpoints of women painters need to be recognized and valued. Shows like this not only raise the profiles of the artists involved, but also, by doing so, they enlarge our portrayal and understanding of the woman as subject in art.

Here are two of the three paintings I will be showing: 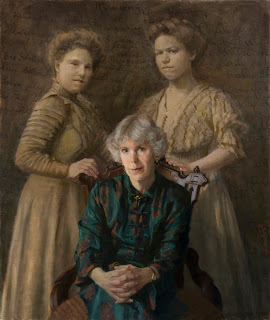 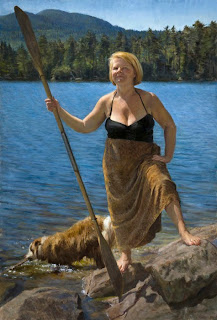 
Posted by Alexandra Tyng at 9:23 PM No comments: