Incorporating the "Odd" Object in a Portrait 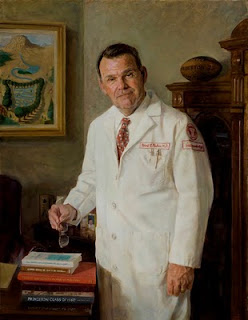 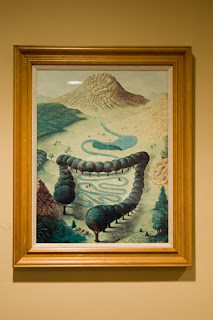 When my husband Steve started working at Temple University eleven years ago, little did I dream I would ever be working with his boss. After all, Steve's work is in medicine, mine is in art. But last fall, Dr. Robert Fisher, Chief of Gastroenterology, asked me to paint his portrait, and I was honored to accept the commission.
From the very beginning of our collaboration, there was one thing Dr. Fisher was adamant about: he wanted the portrait to include a painting he owned of the G.I. tract. Now this seemed logical to me considering Dr. Fisher's specialty, and I when I paint portraits I like to incorporate evidence of people's professions and interests. But, then, a painting of a G.I. tract--well, that could be tricky to say the least! Dr. Fisher said his brother, a sculptor, wasn't keen on the idea. My husband told me people at work liked to joke about it. At this point I had never actually seen this famous painting, but I was getting a little worried.
So much buzz was circulating about this G.I. tract painting hanging in Dr. Fisher's office that when I actually saw it, I was relieved. I could kind of see why Dr. Fisher liked it so much. It was also a landscape. And if you squinted, you could also see it as a jolly face. A very clever painting--metaphorical rather than graphic. It would actually be fun to include it. And I like a challenge.
We also ended up including books, family photos, a college football, and other objects, visual clues that tell a story about Dr. Fisher, his history, his personality and character. These things, when they are chosen and arranged carefully, can add to the visual interest of a portrait. On the other hand, it's always important to make sure the parts are subordinate to the whole. A portrait can contain many things, but the artist can make sure the focus of the painting remains on the person, by controlling the composition, edges, lighting, and massing of light and shadow. In this way, a portrait containing many elements can be brought together in a unified, simple whole.
By the same process, the "odd" object can also be brought into the whole. It has to first be thought of and fully accepted by the artist as an integral element in the composition. When I first saw the painting of the G.I. tract, I had to contemplate it and envision how it would be placed in the composition, what level of importance (i.e. what value and level of detail) it should have, in relation to the subject. The end result is that it should not "stick out like a sore thumb" or be banished to obscurity in the dark background. As the artist, I've got to go so far as to even embrace it as a necessary part of the symphony that will culminate in the celebration of the subject.
Posted by Alexandra Tyng at 10:37 AM 2 comments:

Many thanks to the Portrait Society of America for awarding Honorable Mentions to two of my paintings in the 2010-11 Members' Showcase Competition! The categories were lots of fun this year for a lot of artists like me who not only paint portraits, but also other genres, including landscape and still life. 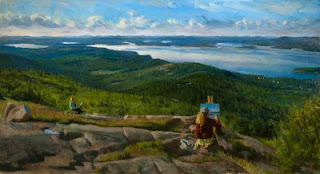 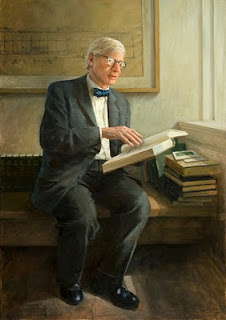 The "Outside the Box" category was a great idea--it was a lot of fun thinking about what to enter, and I'm curious to see how some of the other artists interpreted the idea and what they entered.
Posted by Alexandra Tyng at 3:14 PM 2 comments: 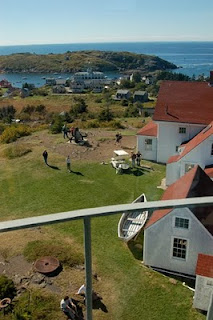 View from the lighthouse tower.

Looking back over the last few months' posts, I realized I hadn't blogged about my annual trip to Monhegan with the Maine Landscape Guild. Every year for the past four years, my artist buddies and I have carved out time for a week-long stay on this very special island nine miles off the coast of Maine. Last fall, our stay coincided with "Lighthouse Day," a fundraising event for the recently restored Monhegan Lighthouse. We got a tour of the buildings and we were able to climb up the iron staircase to the top of the lighthouse tower--very exciting for me because not only do I love lighthouses and towers, but also I love to paint views looking down on the landscape from an elevated viewpoint. Needless to say, I took a lot of photos from the tower looking out over the village and neighboring island of Manana.
After the tour, I was walking through the Keeper's house, also known as the Monhegan Maritime Museum, and I noticed a wonderful portrait by Alice Kent Stoddard. I had seen some of Stoddard's work in Philadelphia, in the Drexel Collection, and this portrait of a former lighthouse keeper was among the best I had ever seen of her work! I asked the curator about it, and she said, "Oh, there are some even better ones in the vaults! Would you like to see them?" Of course I said yes. She took me to the "vault," which on the outside looks like just another white clapboard building in the lighthouse complex. But inside was rack after rack of incredible paintings, including a staggering collection of paintings by Alice Kent Stoddard! I thought she painted men especially well-and here are three of my favorites: 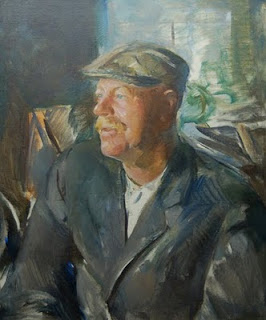 Portrait of the man who built the Island Inn, by Alice Kent Stoddard 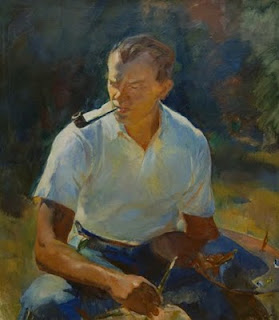 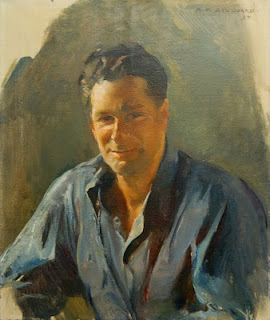 Another Stoddard portrait
I highly recommend the Monhegan Museum to anyone interested in seeing a star-studded collection of work by well-known artists who painted in Maine. Both the keeper's house and assistant keeper's house have been made into exhibition spaces. And if you happen to get there on Lighthouse Day, you'll get to climb the tower and get a 360 degree view of this artists' island.
Posted by Alexandra Tyng at 8:10 AM 2 comments: