Some Paintings from the Monhegan Trip 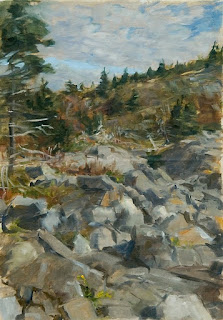 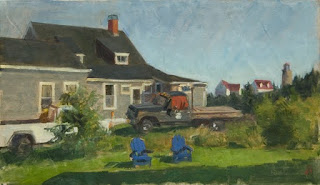 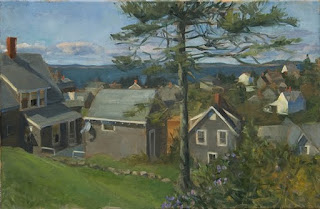 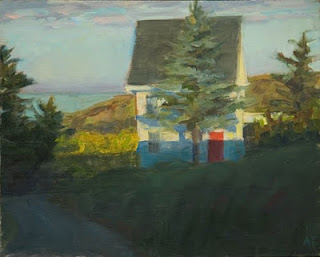 Dawn Prenumbra, oil, 8" x 10" (this was a fifteen-minute sketch of the sunrise color)
Posted by Alexandra Tyng at 6:28 PM 2 comments: 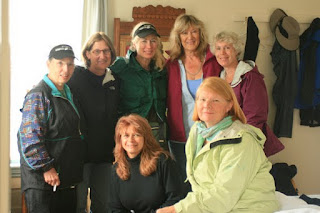 The MLG Painters 9/17-9/24, Clockwise From Left: Judy Carducci, Sue Braswell, Linda Brandon, Greer Jennison, Alex Tyng, Diana Cobb Ansley, and Carrie Lewis.
In September I headed back to Monhegan Island, off the coast of Maine, to paint for a week with the Maine Landscape Guild. The Guild has expanded: Linda Brandon flew in from Phoenix Arizona, Sue Braswell came from Virginia, Judy Carducci and Carolyn Lewis from Ohio, and Greer Jennison all the way from Nevada! We also split into two houses plus a few staying at the Monhegan House. And to make things even more complicated, another group of MLGers (Eliza Auth and Mary Walsh) came the following week. 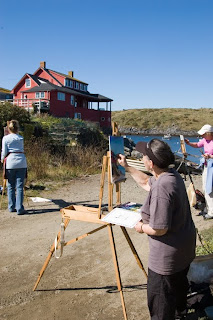 Judy and Greer painting outside the Red House. 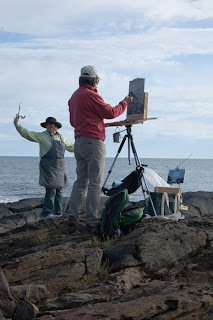 Diana and Sue painting on the rocks at Gull Cove. 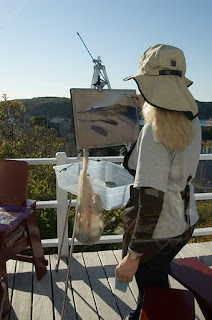 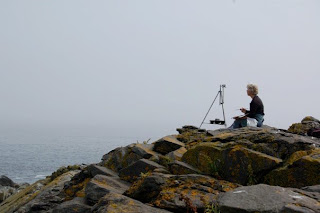 And here I am at Gull Cove, trying to figure out how to salvage my fog painting. 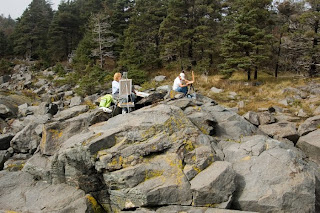 Another one of Diana and Sue from where I sat on the rock.
The weather wasn't always "drop dead gorgeous" (as Diana Cobb Ansley is fond of saying), but the varying weather patterns made for some interesting cloud formations and even some days of fog. I tried to paint the fog at Gull Cove, but made a miserably dull mess. The master of fog painting was Judy, who produced some wonderful pastels, one from inside the hotel during the worst weather. We all got together for dinners, wine and cheese, critiques, and some great conversations.
One foggy afternoon, Linda and I decided to try painting each other. We each posed for half an hour. 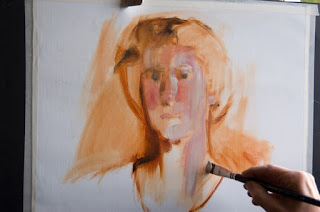 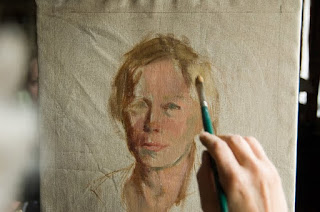 My painting of Linda. Sue and Diana were amazed at how differently we mixed paint and approached the work.

There was a propane shortage on the island when we got there, and people were eagerly awaiting the next shipment from the mainland. We had to conserve fuel, which meant no hot showers for the first couple of days! Boy, were we glad when the delivery man arrived to hook up a full tank! 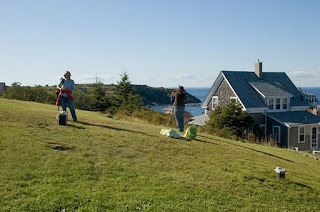 Sue, Diana, and I were up on Horn Hill behind our house painting when the delivery truck arrived. YES! 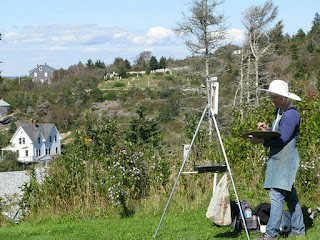 We walked up to the lighthouse museum, and again the curator was kind enough to show us the wonderful portraits by Alice Kent Stoddard. In all it was a truly wonderful week, a perfect ending to the summer's painting adventures.
Posted by Alexandra Tyng at 5:22 PM No comments: