Star at the Edge 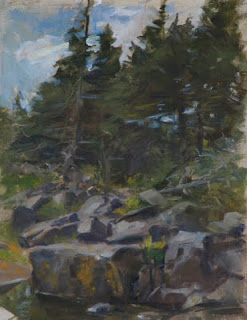 In response to those who ask me about how I create a painting, from the beginning stages to the finished work, I'm posting a step-by-step description of the process of one painting, Star at the Edge.
Every painting I do evolves a little differently. Sometimes I am painting on location and I know right away that my plein air sketch will need almost no compositional changes to turn it into a larger studio painting. Or the small oil sketch might become part of a larger painting. But in this case, I was working in Gull Cove on Monhegan Island, ME, and I had a vague idea of painting a figure with the trees and rocks as the background. The only problem was, I wasn't sure exactly what part of the scenery, and what angle, I would use. I didn't even have a clear idea of who was going to paint, or the idea behind the painting. So I decided to just focus on some trees and rocks that would make a pleasing composition, and worry about the larger painting later. Here is my oil sketch, Rocks and Trees, Gull Cove, 14" x 11".
While I was in Gull Cove, I also took some photos of the rest of the scene. 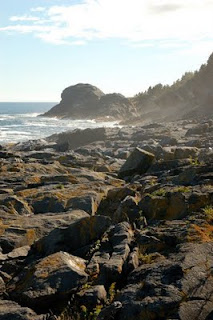 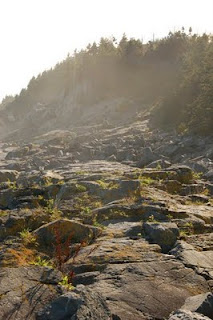 You'll notice that the oil sketch gives me an accurate idea of the color and value range, while the photos provide some additional information, but certain things are washed out, like the sky. Even with Photoshop you can't bring that back, so I often take more photos of just the sky. It's better to have too much information than not enough.
A few months later, a friend of mine, Nancy Bea Miller, came to a turning point in her career. After many years of working as a professional artist, she decided to go back to school and get an MFA. I decided to paint a portrait of her at this turning point. We had been discussing the idea of "star quality" in art, and how much was determined by popularity, publicity, and connections, as well as talent and hard work. I thought of the starfish, a sea creature with five arms, i.e. a five-pointed star. Here are some symbols associated with the star/starfish: the eternal, the undying, constancy (the Pole Star), aspiration, education (five-pointed star), spiritual wisdom, and divine guidance.
I was also "playing" with the tidal zone between ocean and land, where the waves churn up things that are beneath the sea and throw them onto the shore. To me this brought to mind the border between unconsciousness and consciousness. If we can go to this "zone" we will find all sorts of treasures that can lead to a fuller, richer life.
One thing that I wanted to convey was the uncertainty of finding a star and wondering what to do with it. Because we can find a treasure and use it in many different ways, or not use it at all! So in Nancy Bea's expression I wanted to convey some of this uncertainty.
Since Nancy Bea didn't have time to pose, couldn't hold the expression very long (the sideways look led to dizziness), and the weather was becoming too cold, I took photos of her and worked from them. I made sure that the lighting conditions in the photos were the same (time of day and direction of sun) as they were in the setting.
Now to the nitty-gritty of painting. I decided it was important to show just a bit of the ocean. There were a few days of tremendous surf that created a golden haze (visible in the distance), and this added a feeling of mystery and excitement to the "zone" between water and land. So I decided to set NB's figure against the long view. My oil sketch of rocks and trees was just to the right of the composition, but nevertheless it came in handy for nearby colors, values and brushstrokes, and also the color of the sky and clouds.
When I plan out a composition, I like to print out photos, paste them together, and move borders in and out until I like the balance. I also print out photos of the figure, and play around with size and position in the same way. Making a polished reference in Photoshop doesn't interest me. I'd rather do this cut-and-paste stuff, because the motley-looking photo-pastiche that results from this process is just a compositional guide. I don't want to just "copy" a finished-looking photo with every detail already worked out. I also have my oil sketch to refer to. The real synthesis is in my head.
Here are some progress shots: 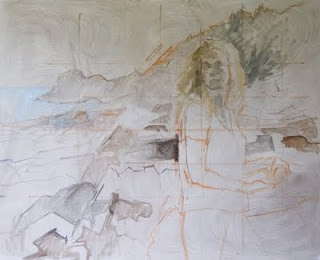 I stretch my own canvases with unprimed Belgian linen, prime them with acrylic gesso, and tone them with a warm neutral wash of black, burnt umber and white. First I drew a grid on my photo-pastiche and a corresponding grid on my canvas. Since I work large, the grid helps me to place complex things like rocks. I keep the grid very large so I don't feel like I'm connecting the dots, and I am still drawing freehand. 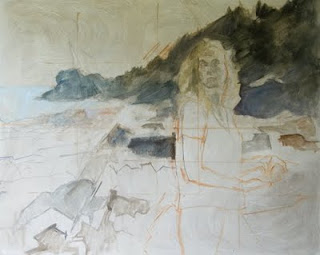 Here I'm starting to fill in the dark trees behind NB's backlit head--the focal point and area of greatest contrast. 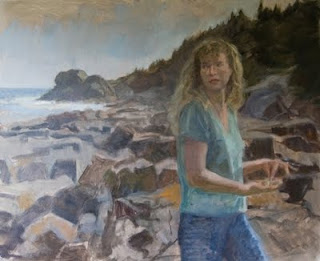 Starting to differentiate light and shadow areas and put in a color mosaic. 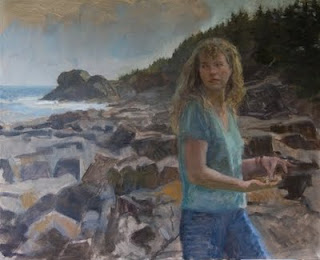 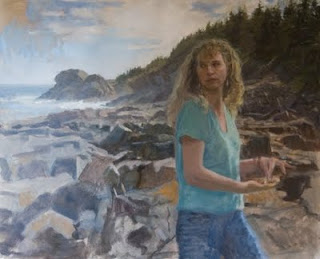 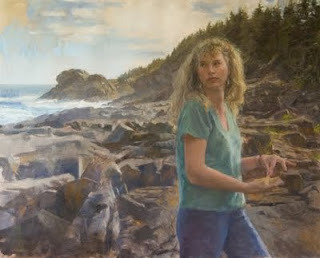 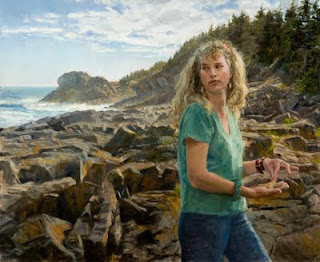 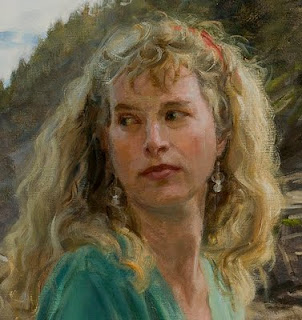 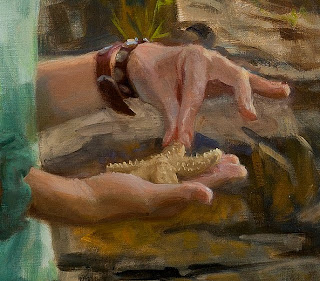 Here are details of the head and hands.
This painting, along with 30 + others, will be in my upcoming show, RIGHT HERE: NEW MAINE ISLAND PAINTINGS, opening August 5th at the Dowling Walsh Gallery in Rockland, Maine. The gallery is located on 357 Main Street, right across from the Farnsworth Art Museum. Catalogs include an essay by author Carl Little, and will be available through the gallery.
Posted by Alexandra Tyng at 8:26 AM 4 comments:

Painters Painting Each Other

Nancy Bea Miller and I have reciprocal portraits in the Painters Painting section of Outdoor Painter! Both our paintings were done on the same trip, one year ago when we went on a "business trip" to Maine and stayed with Diana Cobb Ansley(who appears in my piece, too) on Mount Desert Island for a few days. Click each image to enlarge and read the article by Steve Doherty. 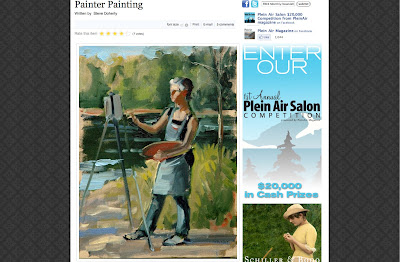 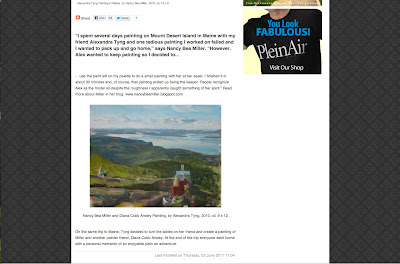 What a fun and fruitful trip that was! For a time at least, you can see the piece online by clicking here.
Posted by Alexandra Tyng at 8:43 AM No comments: