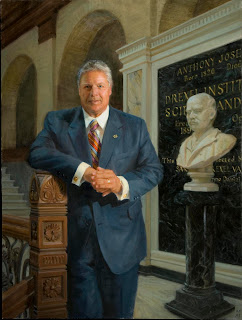 Last week my portrait of Dr.Constantine Papadaks, 11th President of Drexel University, was unveiled. The portrait was commissioned by the Board of Trustees of Drexel and will be a gift to the unversity. Here we are at the unveiling: from left, Dr. Papadakis, me, and on the other side, Mr. Jacovini and Mrs. Papadakis. Missing from the photo is the Papadakis' dog Honey, who attended the event.

Before the official unveiling, I entered this portrait (with the proper permission, of course) in the Portrait Society of America's annual international competition, and it was awarded a Certificate of Excellence!

Here's a better photograph of the portrait. I should mention that most of the photos of my artwork, includng this one, are taken professionally by Karen Mauch.
Posted by Alexandra Tyng at 8:15 PM