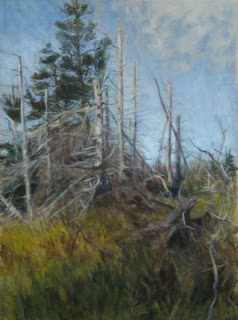 While I was on Monhegan in September, I became fascinated by the groves of dead spruce trees that can be found in the woods and on the eastern ocean-facing headlands. There is a "witch's broom" disease that kills many trees when they reach maturity. Not a happy situation ecologically, but an interesting one artistically. There is an "aliveness" in their "deadness." The bleached skeletons can look as if they are dancing, twisting, gesturing, and striking various poses. While I was there, I spent a few hours making some pencil sketches of the trees, and since I've gotten back to my studio I have been painting some of my favorite compositions.
Posted by Alexandra Tyng at 10:44 AM