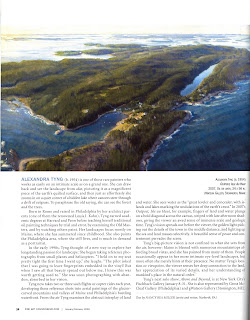 The January/February issue of Fine Art Connoisseur Magazine should be hitting the newsstands about now. I'm excited about it because my Maine landscapes are featured in this issue, in an article entitled "Three to Watch: Artists Making Their Mark."

The section about me is by Nancy Bea Miller, who not only is a talented artist, but also a fine writer.

The editors chose to reproduce a painting of one of my favorite subjects, Isle Au Haut, one of the lesser known areas of Acadia National Park. Isle Au Haut is smaller than Mount Desert but has similar geological features including comparatively high mountains (hills) and long, glacially carved troughs between them, one of which is a lake. Because it is not accessible by car and is quite far from the mainland, it is still relatively unspoiled. From the air it has a lonely, dark, mysterious feeling, which I've tried to capture in this painting.
Posted by Alexandra Tyng at 7:28 AM