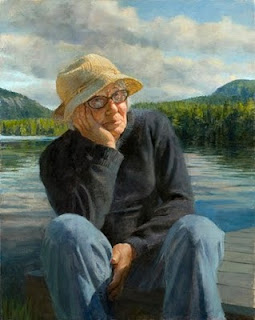 I'm pleased that my painting Right Here (oil on linen, 36" x 28") will be included in the Women Painting Women show at the Robert Lange Studios in Charleston, South Carolina, Friday, November 5, 5:30-8:30 p.m.

Women Painting Women was started as a blog by artists Sadie Valeri, Alia El-Bermani and Diane Feissel. The blog is an ongoing and ever-growing collection of "Figurative Paintings of Women by Women with a focus on Contemporary, Living Artists." Over an amazingly short period of time, the founding artists have taken their idea further by creating an exhibition by the same name, and finding a venue for it. They are now exploring ways to take the WPW idea even further.

This is going to be the second show of women's art in which my work is included--and to think I used to swear I would only enter shows that were not women-only! I think something changed for me when I observed how the realist movement, more specifically the realist figurative movement, had become focused on and dominated by the work of male artists. I am hoping people will make an effort to see the quantity of highly accomplished work by women that is out there in the art world, because I would like to see more of a gender balance, more of a mutual respect, less of a boys' club.

A word about galleries: I would like to see gallery directors think twice about the way figurative art is marketed. I believe that the way it is pitched to potential collectors has a lot to do with the type of art collectors are buying--or not buying. Here are a couple of issues that could be addressed:

The AGE of the artist. Why is a young artist such a hot commodity? Doesn't a middle-aged artist still have room to grow? Doesn't age bias eliminate many female artists whose career trajectory takes a different path?

After being represented by a highly respected New York Gallery since 1994, being one of a group of male and female artists who have been treated with equal respect and whose work sells equally well, I am puzzled by the existence of galleries that only represent men, or claim that only men are financially worth representing, even though they say they give women a chance. I'm hoping that, in the near future, there will be more galleries that showcase the figurative work of male and female artists equally.
Posted by Alexandra Tyng at 6:25 PM