I knew Memorial Day weekend was going to be exciting because my painting Year at Sea had been chosen as a finalist in the big international competition held every year by the Portrait Society of America. And this year the conference was in Philadelphia, my home town. Plus, I had been asked to be on the faculty, and I was looking forward to that. 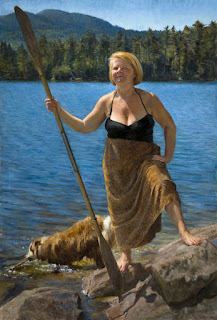 A big surprise was in store, however: Year at Sea won First Place! Here's the winning painting.

Let me tell you a little about it. It's a portrait of my friend Diana, but I'm also using Diana as a model through which to express ideas that are both internal and universal. I call this a "figurative portrait" because it has elements of both figurative painting and portraiture. The whole process from first idea to finished painting took years. I first had an idea of painting Diana as a kind of modern pioneer woman, sitting on a large glacial boulder in front of her house in Maine. In my first idea she was turned sideways, but then I did an oil sketch of her in my studio and I realized the expression I had caught was HER, and if I did a larger portrait of her, it should have that expression or something similar. Meanwhile, I was trying different poses and backgrounds. I wanted dark trees behind her head, but then I realized she is more of a water-person and so the painting should have a background of water.

The idea became fully formed when, following the death of her mother, Diana began taking on some of her mother's characteristics, expressions, and preferences. I was fascinated by this, having seen this process in several other women I know, and being aware that my own mother's life would end soon. I realized it is a woman's way of internalizing her mother, of incorporating the real mother into herself. My friend was reevaluating her life, and realizing what was most important to her and who she truly was. She was searching, and in the process of change. The expression being "at sea" means being lost, but I did not see Diana as "lost." On the contrary, she was grounded and able to steer her course (thus the feet on the rock and the kayak paddle in her hand) though she was not exactly sure where the course would lead. The process of mourning and assimilating her mother took a little over a year; thus the title "Year at Sea." I like to give an expression a slightly different slant, suggesting different ways of seeing a person or situation.

When I am gathering the reference material for a painting, I want to make sure I have the best possible information, most importantly accurate color, perspective, proportion, and details. I took over a hundred  photos of Diana, and did oil sketches of the lake shore and rocks at her feet, at the same time of day. I sketched her in different positions. When I finally get down to painting, I have all the references at hand. Here are two oil sketches: the portrait head and the foreground rocks: 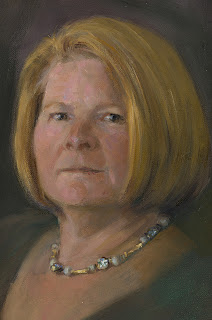 When I am designing a painting, I stay focused on the central concept and eliminate all things that seem unnecessary. Everything in the painting, from the background to the water to the dog, wedding ring and pink nail polish say something important about the subject and the idea.

I am honored to receive this award for Year at Sea. Many thanks to to the jurors, judges, and to the Portrait Society of America!

Posted by Alexandra Tyng at 7:24 PM

Congratulations ! This was one of my very favorites from this year's finalists. As a landscape painter, I loved the figure so skillfully made part of her surroundings (which of course tells us so much about her). The feeling of sunlight on the figure and the landscape is so convincing and compelling. And, of course, who can resist the dog in the water!? Bravo!

Congratulations! It's a wonderful portrait and I enjoyed reading about the development of your ideas.