Houses were always one of my favorite things to draw. At first I drew brightly colored idealized houses, then slowly I transitioned more into detailed line drawings. During my childhood, there were lots of abandoned and derelict Victorian houses in and around Philadelphia, and I began to be fascinated by their air of mystery and lost potential, their complex shapes and intricate detail. I wondered who lived in them, why they were left to deteriorate, and what might be discovered inside them. I made up stories like this one (illustrated, of course) about two similar houses. Why and how did one house become “haunted,” while the other was “unhaunted?” 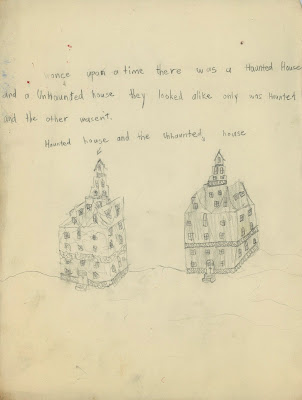 I think this fascination began at a certain point when the innocence of my very young childhood gave way to a gradually expanding awareness of the people around me, and to my distinctness as a human being. My parents and friends had their own lives, and they made decisions that did not always make sense. Because things happened outside my circle of knowledge, there were many mysteries to be solved, and I was a curious and determined person who drew things to understand them. For instance, I drew the same house over and over in great detail and from different angles as if that would help me to figure out what made it spooky, what was at the core of my fascination. I think this is where creative urge comes from—this awareness. You are not just satisfied by looking at something, you want to make your own story or painting or sculpture of it and thereby know it inside and out.

When I was about seven, I learned of an abandoned house up the valley from Miquon, my elementary school. It happened this way: a teacher told us we were going to hike up the stream that ran down the length of the valley to find its source. We hiked right up the stream in the water, past the boundaries of the school into unfamiliar woods--tangled and dense with honeysuckle and wild grape vines that climbed from tree to tree, bending them into unusual shapes, and enveloped the underbrush, weaving tunnels and rooms. The woods became more tangled as we hiked uphill into unknown territory. It seemed to take a long, long time. Finally we came to a stone springhouse that had a crack in the lower part of the wall, out of which water was pouring and flowing downhill between some rocks. This was the source of the Miquon Stream.

In front of us was a shell of a house. It was built on a hill that continued up behind it. The front of the house was supported by a series of thick stone piers. It was very long and straight, with short windows on the top floor. Part of the roof had collapsed and the interior was dark and hollow. The camp counselor told is that it had belonged to the family of two sisters who had taught at Miquon, and that it had burned down.  She took the kids to explore it but I refused to go in because I wasn’t sure it was safe and, besides, I was very sure it was haunted. While they were exploring I sat on a rock, memorized every detail of the house and half wishing I were exploring the ruins with the other kids.

For years after that I had dreams about hiking up the stream, through overgrown woods and, with each consecutive dream, finding the house and springhouse became more significant and more exciting. But I never actually went back to try to find it. I think I preferred the dream.
Years later, my children went to the Miquon School, and I served three years on the Board, During that time a large piece of property up the valley was coming up for sale, and the Board members arranged to see it. We drove up the hill, turned off onto a dirt road--and there was the house of my memory. It had been fixed up but everything else was the same with acres of tangled woods all around.

I was surprised by how well I remembered the house, and I felt a thrill at seeing it again, even though my memory of it had more magic than the reality. I wanted to paint the story of finding the house and the source of the stream. So I went back to the house and studied it carefully from different angles, figuring out how I could make the composition work.  The springhouse has been altered considerably, so I decided that in the painting I would change it back to the way I remembered it. The stream in the painting would be a composite of different sections of the actual stream, combined to show more dramatically how the water emerged from its source and to move the viewer’s eye from the foreground back upstream to the focal point. It would be more a painting of a memory than a literal copy of reality, but I would use the real elements as a basis for re-creating the memory. 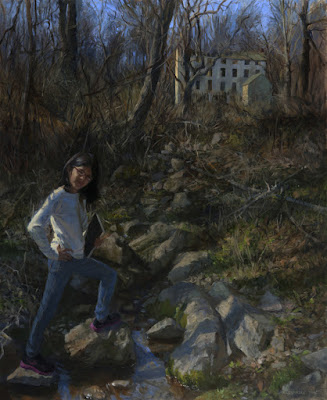 
As I planned this painting the symbolism became clear. Water is the source of life—literally, “water of life.” The girl is on a journey.  She’s climbing uphill from a tamer place to a more tangled, difficult place. She’s going from where the water is visible to where it’s barely visible to where it actually emerges from the ground into the light, from unconsciousness to consciousness. She is going from innocence to awareness. The house is shrouded in mystery and the girl is drawn to it. She doesn’t want to bring it into the light because that would dispel its mystery; she would rather envelop herself in the mystery and derive inspiration from it.
Posted by Alexandra Tyng at 8:37 PM

Alex, I love hearing the story behind this painting, and I especially like that you included the drawings of the two houses you did when you were a kid. Not too long ago, I had a dream that I was in a house and when I went to look in the basement, they told me that a river was running through it. The water would sometimes rise quite high, flooding the whole basement. It was a fascinating dream that I still remember vividly. It's uncanny that this house you depict was actually the source of a river! It's a very powerful concept that resonates with me.

SD, that seems like a very significant dream. Reading it, I thought of how caves are hollowed out by underground water. Carl Jung considered the house to be a symbol of the self, which would make the basement the underground part of the self or the part that is not conscious but is the source of good creative material. The river running through it seems like a powerful, constantly renewing stream of "lifeblood" that sometimes waxes, sometimes wane-- not predictable, but always there.

Thanks so much for commenting!

You're so insightful, Alex! Over the past year or so I've had several dreams about basements and foundations of buildings -- or lack there of. :) I want to incorporate dreams into my artwork more often. I'm looking forward to seeing your new paintings, and hearing the meaning behind them! ~Stephanie D.

SD, now that I know your true identity (haha), your painting *Exploring the Basement* popped into my head right away. I love that one. You are really on to something.

My niece just found a post of me online on the Portrait Artist Forum of my 2007 workshop at the Scottsdale Art School. You had requested that I consider doing a workshop in Philadelphia.
I never (mea culpa) read that post and so did not reply. So sorry. I don't mind being impossible, but I dislike being rude.

I am glad things are going splendidly for you. Great blog!