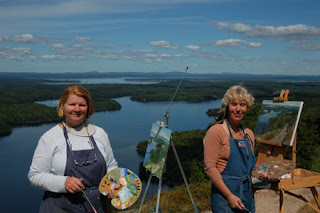 I could have called this a "busman's holiday" but it sounds un-artistic. Plus, I had too much fun to claim that the work overtook the play. Most of my two weeks was spent on Mount Desert Island. Here I am on top of Beech Mountain with my friend Diana Cobb Ansley. Diana and I have known each other since our early teens, and we actually met in Somesville, a small village in the center of MDI that was settled by our common Somes ancestors. Diana is a painter, as you can see. Yes, I know my eyes are closed AGAIN--but you can't ask a passing hiker to take tons of photos just to get one of me with open eyes.

When I am in Maine I pay a pilot to fly me around in a single-engine plane to take reference photos that I later use to develop my aerial paintings. This year I flew over Rockport Harbor, Vinalhaven and North Haven, Deer Isle, Isle Au Haut, and Mount Desert. The weather was beautiful and it was exciting to see the light, the colors, and the endless forms of land and water.

Sometimes I fly out of Bar Harbor, but my favorite pilot is Sandy Reynolds of Maine Scenic Airways. Besides being an expert pilot, he understands artists and photographers. He operates out of the airport in Belfast, ME. For anyone who is interested in flying wth Sandy, his website is: mainescenicairways.com. You can reach him by phone at: 207-338-4736.

This year I also fit in a short visit to Indian Island, off Rockport, with my lifelong (and multitalented) friend Linda Vizi. This was Linda's second visit to the island; we had gone there together after graduating from high school in 1971! On the island, Linda worked on her applique while I painted a portrait sketch of my brother's mother Harriet and a plein air sketch of the lighthouse and house.

Altogether it was a great two weeks, and it has been a difficult transition back to the regular work schedule.
Posted by Alexandra Tyng at 6:51 PM

Anonymous said...
This comment has been removed by a blog administrator.
September 2, 2007 at 1:15 AM

Alex, what a wonderful blog this is and you have terrific work on this site! I love the freshness and light in your outdoor paintings here. I'm really jealous of your Maine trips - I hope you post lots of photos of what you did. One of these days I'm coming with you up there.