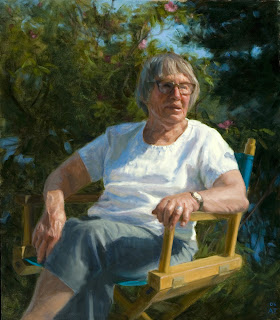 I just learned that my portrait Nan Talking received an Honorable Mention from the Portrait Society of America in their 2007 Members Only Competition, entitled "Taking it Outside: The Figure in an Outdoor Environment." Among others, Garth Herrick and John Ennis, also received Honorable Mentions!

The Juror, Edward Jonas, says the following: "The criteria {for judging] are . . . based on drawing, composition, color, light, and use of pictorial space. . . .artists needed to show special sensitivity and attention to temperature and light source. Often challenging for artists is the need to adjust their palette to compellingly and accurately capture direct light, ambient light and the overall temperature of light in color and atmospheric effects."

For some reason I don't see too many awards of any kind placed on portraits of middle-aged or older women. It's a different story with portraits of older men, especially if they are "characters" in some way--if they have a long, flowing beard, for instance. But unfortunately women can't grow beards (at least we aren't supposed to).

In this portrait of Nan, I tried to capture visually her accent, which is mostly German and maybe slightly British. That was the motivation behind this, and also showing the liveliness and character of her features in the bright sunlight.

On another note, The Duet, the painting below, received a Top 100 Award from the ARC, excellent and very unexpected news! For a review of the ARC show, click here.
Posted by Alexandra Tyng at 1:45 PM